After the 1988 Supreme Court decision tossed out Canada’s abortion law, anti-choice forces were far from finished. On the same day of the decision, Laura McArthur of the Toronto Right to Life Association announced, “I don’t care what anybody says, I don’t care what the law says. I’m going to defend those [fetuses] as long as I have a breath left in me.”

Within days of the decision, BC’s government led by Premier Bill Vander Zalm declared that the BC government would refuse coverage for any abortion not sanctioned by a TAC. The resulting uproar from the pro-choice movement and the media forced Vander Zalm to back down, and his refusal to fund abortions was also found unconstitutional by a BC court. Other provinces put in place or kept various restrictive laws and policies on abortion. Saskatchewan allowed hospital staff to refuse to do abortions. Nova Scotia and New Brunswick implemented a no-payment policy for abortions outside of hospitals. Newfoundland’s only abortion doctor retired, and the total lack of access in PEI continued as it had since 1982.

A few months after the decision, the federal Progressive Conservatives under Brian Mulroney introduced an outline of legislation to recriminalize abortion, but it was defeated by a resounding 147-76. Later that year, a Gallup Poll showed that an overwhelming majority of Canadians (71%) believed that abortion is a medical decision between a woman and her doctor.

Nevertheless, the feds attempted to make abortion a crime once more, introducing Bill C-43 in November 1989. It was an amendment to the Criminal Code that would prohibit abortion unless a doctor believed the pregnancy was a threat to a woman’s physical, mental or psychological health. The bill basically replaced the decision of a Therapeutic Abortion Committee (TAC) with the decision of a single doctor, who would face a maximum jail term of two years if the law was disobeyed. Even before the legislation was offered, a Gallup Poll showed that 62% of Canadians opposed the attempt to recriminalize abortion, with fewer than 30% supporting it. The House of Commons passed the bill, but when it was presented to the Senate in 1991, it was defeated in a dramatic tie vote.

After the defeat of that bill, the government finally gave up and washed their hands of the abortion issue. They promised not to introduce a new law again, and every government since then has repeated the promise, including the current Conservative government. The pioneering precedent of R v. Morgentaler has become even more entrenched over time, having been cited at least 92 times in other court cases over the years, including 34 at the Supreme Court level, thereby strengthening the rights protected by it.

Access to abortion improved tremendously in the 1990’s. Many clinics and health centres opened across the country that provide abortions outside hospitals. Abortion is also extremely safe. Even though there’s no gestational limits in Canada, over 90% of abortions are done in the first trimester, only 2-3% are done after 16 weeks, and doctors do not do abortions past about 20 weeks except for compelling health or genetic reasons. Our overall abortion rate is about 14 per 1000 women of child-bearing age per year, a fairly low rate compared to other developed countries.

While Canada has had tremendous success in the decriminalization of abortion, we are not perfect yet. There are too many politicians who would never lift a finger to improve women’s access to abortion. Access is also hampered by our sheer size – being the second largest country in the world after Russia and by far the least populated for our size makes it much harder to deliver accessible abortion services to all Canadian women. Outside major centres, women often must travel to find abortion services, and resources and information may be scarce, especially for the disadvantaged and racialized, particularly poor women and aboriginal women.

On the plus side, several toll-free lines have been introduced over the years to help provide information to women on how to access abortion or other sexual and reproductive health services. Options for Sexual Health and the BC Women’s Hospital each operate a hotline in BC, while Canadians for Choice and the National Abortion Federation operate national hotlines. 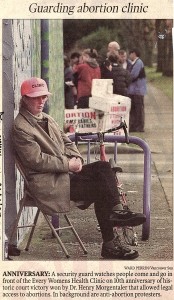 Over the years, the pro-choice movement and providers successfully challenged provinces to fund abortions in private clinics. Today, New Brunswick remains the last holdout, demanding that women seek the approval of two doctors to have a funded hospital abortion, in direct violation of the Morgentaler decision. Abortions are not available at all in PEI, although women can travel to Halifax for a funded abortion. The Territories, Saskatchewan, and Nova Scotia have no clinics, although some hospitals there provide the service.

A University of Ottawa report finds that “wait times are long (up to six weeks in Ottawa) and only one in six hospitals in Canada offers abortions. There is a looming shortage of doctors willing to provide the service; many are approaching retirement and younger MDs are not replacing them, some out of fear of harassment and others because they have not witnessed the dangers of unsafe abortions.”

One of the darkest chapters in the history of the abortion rights struggle in Canada is the horrific shootings of doctors during the 1990’s. Three Canadian doctors were shot, most likely by an American anti-abortion terrorist who repeatedly crossed the border. James Kopp is now in jail in New York State for murdering an abortion provider there. The ongoing threat of violence and frequent anti-choice harassment (including stalking and death threats) has frightened or deterred some providers, which aggravates the doctor shortage, especially in smaller centres where they can more easily be identified and targeted.

A 2010 study by the Abortion Rights Coalition of Canada found that 64% of clinics currently experience some degree of protest activity. Since 1999, extreme anti-choice groups have also taken to displaying graphic pictures of aborted fetuses at clinics, on city streets, and at universities. Over 150 anti-abortion “counselling” centres across Canada masquerade as unbiased centres that help pregnant women with all options, but instead give out medical misinformation and try to dissuade women from abortion.

While abortion services are generally covered in Ontario, doctors who do abortions in their offices are forced to charge patients some fees because the doctors do not get sufficiently reimbursed by OHIP. Abortion is still not covered under reciprocal billing between provinces, meaning if a woman obtains an abortion outside of her home province, she will not usually be reimbursed. This discriminatory barrier affects students in particular, as well as new immigrants and Canadians moving to other provinces.

Challenges that threaten evidence-based policies on comprehensive sexuality education continue. In Alberta, the Wildrose party ran in the 2012 election with a policy to impose “conscience clauses” that would allow some professionals such as pharmacists to deny contraception to women. Again in Alberta, the Conservative government passed Bill 44, silencing classroom teachers on a host of issues, many related to human sexuality. 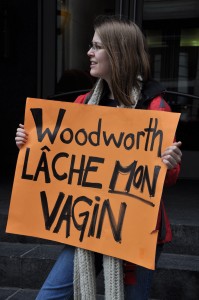 While we are more fortunate than American women, who live in a society that treats the vagina as public property, we have our own problems fighting possible legal encroachments on our rights. Since 1987, we’ve seen 45 attempts to recriminalize or restrict abortion with Private Members’ Bills and Motions. None has passed and none likely ever will – since 2006, the pro-choice movement has started spending time and resources successfully fighting each one.

In 2012 for example, a small-time politician sought to make the front pages (successfully) by a mealy-mouthed invitation to have a “conversation” about when life begins. His efforts were exposed as an attempt to make abortion a homicide by turning fetuses into legal persons. More recently, we have had to deal with one of his colleagues who fatuously warns against female feticide in certain South Asian communities, thus combining the desire to control women with racism. Of course, if the Prime Minister – the font of all power in the Canadian (or as he prefers to call it, the Harper) government – wanted these little forays to stop, they would be over in a moment. In other words, those who believe in choice must remain, as ever, vigilant.

This archival site and all articles were created in 2013 in honour of the 25th anniversary of the Morgentaler Decision in 1988. It is no longer kept up to date, so please be aware that information in some articles may be incorrect or outdated.

Theme by Anders Noren — Up ↑